Before we highlight the different styles of parenting, it is necessary to state our working definition of parenting. Parenting may be defined briefly as the act of raising children and protecting and caring for them to guarantee their healthy growth into maturity. From infancy through adulthood, parenting fosters and supports a child’s physical, emotional, social, and intellectual development. Parenting encompasses the complexities of raising a kid and is not limited to biological relationships.

Your parenting style may have an impact on anything from your child’s weight to her self-esteem. It’s critical to ensure that your parenting style promotes healthy growth and development since the way you interact with and punish your kid will impact her for the rest of her life. Researchers have discovered four distinct parenting styles:

Each style approaches child-rearing differently and may be recognized by a variety of distinct features.

Authoritarian parents are very severe and rigid. The kid is subjected to high expectations yet receives little response. Authoritarian parents adhere to a non-negotiable set of norms and expectations that are enforced rigorously and uncompromising demand compliance. When regulations are floated, punitive measures are often employed to encourage and guarantee future compliance. Typically, there is no explanation for the punishment other than the kid is in trouble for violating a rule. This parenting style is linked closely to physical punishment, namely spanking. “Because I said so” is a standard answer to a child’s authority inquiry. This kind of parenting seems to be more prevalent in lower-middle-class households than in upper-middle-class ones. Children reared in authoritarian households were less happy, moody, and prone to stress. These youngsters often exhibited passive aggression as well. This parenting style may have a detrimental effect on a child’s academic performance and professional route, while a firm and comforting parenting style can benefit.

Are any of the following statements applicable to you?

When a kid challenges the reasoning for a regulation, authoritarian parents are renowned for responding, “Because I said so.” They are not interested in bargaining, and their primary objective is compliance.

Additionally, they prohibit children from participating in problem-solving tasks or hurdles. Rather than that, they establish the rules and enforce the penalties without respect for a child’s viewpoint.

Authoritarian parents may revert to punitive measures in lieu of discipline. Thus, instead of teaching a youngster to make better choices, they are engaged in making children feel bad about their errors.

Kids raised by authoritarian parents are more likely to obey rules. However, their submission comes at a cost.

Children having authoritarian parents are likely to have self-esteem issues due to their views not being respected.

Additionally, they may become angry or violent. Instead of considering how to do things better in the future, they frequently concentrate on their parents’ displeasure. Because authoritarian parents are often severe, their children may develop a propensity for deception to escape punishment. 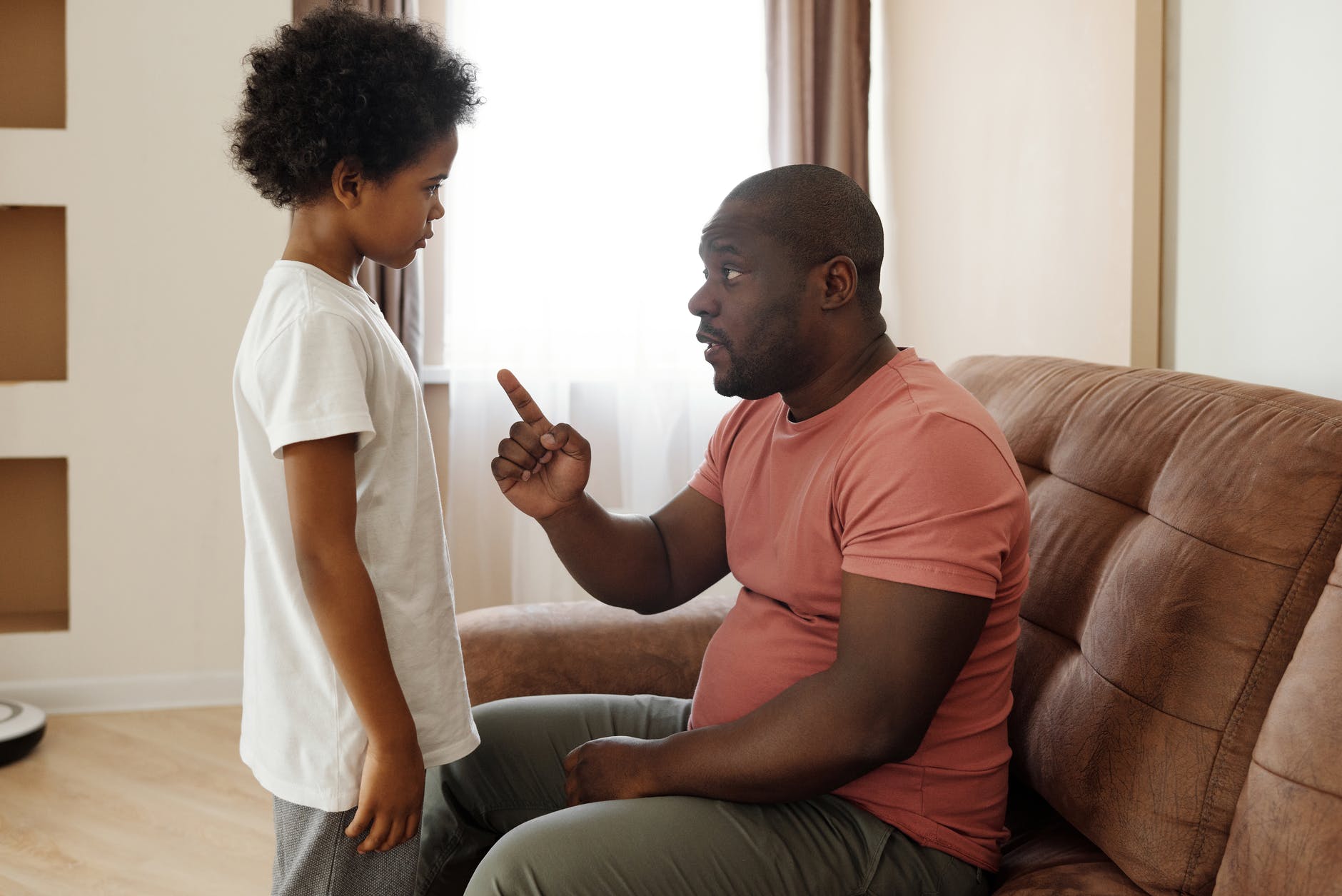 It is referred to as the “just right” approach because it balances moderate demands on the kid with a moderate parental response. Authoritative parents focus heavily on positive reinforcement and employ punishment sparingly. Parents are more conscious of their child’s emotions and capacities and encourage the child’s autonomy within acceptable boundaries. Parent-child communication involves a give-and-take environment in which both control and support are balanced. According to some research [vague], this type of parenting is more effective than an overly authoritarian or an excessively permissive approach. This parenting approach is the outcome of children that are competent, successful, and joyful. In today’s society, when performed without physical punishment, one obtains the most beneficial effects with the fewest complications. These children outperform those reared in permissive, authoritarian, or neglectful families regarding competence, mental health, and social development.

Can you relate with any of the following statements ?

Authoritative parents devote time and attention to averting the onset of behavioral issues. Additionally, they use positive disciplinary methods to encourage appropriate conduct, such as praise and incentive systems.

According to researchers, children raised by authoritative parents are more likely to grow up to be responsible people who are comfortable expressing their views.

Since approximately the end of WWII, permissive parenting has been more familiar with middle-class families than working-class families. In these circumstances, parents place a premium on a child’s independence and autonomy, and parents rely heavily on logic and explanation. Because parents are undemanding, this parenting style often involves minimal, if any, punishment or clear restrictions. These parents assert that their children are not constrained by external factors and are generally very receptive to whatever the kid wants at the moment. Permissive parents’ children are usually happy but sometimes lack self-control and self-reliance due to a lack of discipline at home.

Can you relate with any of the following statements?

If anyone among these comments resonate with you, you may be a permissive parent. Permissive parents are tolerant. They often intervene only when a significant issue arises.

They are very tolerant and take the mindset that “children will be children.” When they do use repercussions, they may fail to make them stay. They may return privileges to a kid who begs, or they may let a child out of time-out early if he pledges to behave well.

Permissive parents often serve as more of a friend than a parent. They often urge their children to discuss their concerns with them, but they seldom attempt to discourage poor choices or harmful conduct.

Children from permissive parents are more likely to have academic difficulties.

They may show more significant behavioral issues as a result of their lack of respect for authority and norms. They often have poor self-esteem and frequently express sorrow.

When parents are mostly emotionally or physically absent, this is referred to as an uninvolved or negligent parenting style. They dont have any expectation of the child and often communicate in a non-verbal manner. They are insensitive to the needs of children and have little to no behavioral standards. If they are there, they may supply the kid with what they need for survival with little to no involvement. With this parenting approach, there is often a significant divide between parents and children. Children who have little or no contact with their parents are more likely to be victimized by other children and to engage in aberrant conduct themselves. Social competence, academic achievement, psychological development, and problem behavior all suffer for children of uninvolved parents.

Do any of the following sentences ring a bell?

If any of these comments resonate with you, you may be an uninvolved parent. Uninvolved parents often lack awareness of their children’s activities. There are usually few rules. Children may lack parental direction, care, and attention.

Parents who are not engaged expect their children to raise themselves. They spend little time or attention on addressing the fundamental requirements of children. Uninvolved parents may be negligent, although this is not necessarily deliberate. A parent with mental health or drug addiction issues, for example, maybe unable to meet a child’s physical or emotional requirements consistently.

In other instances, absent parents are ignorant of kid growth. Additionally, they are often overburdened by other issues, such as employment, paying bills, and maintaining a home.

Children with absent parents are more prone to suffer from low self-esteem.

Sometimes parents may not fall neatly into a single category; thus, do not despair if you are more permissive at times or in some areas and more authoritative in others. However, the research demonstrates unequivocally that authoritative parenting is the optimal parenting style. However, even if you identify more with alternative parenting styles, there are things you can do to develop into a more authoritative parent. With passion and devotion to becoming the most outstanding parent possible, you may maintain a good connection with your kid while still healthily establishing your authority. Additionally, your kid will benefit from your authoritative approach over time.

While it is more convenient for the family if both parents have the same parenting style, some studies indicate that having at least one authoritative parent is better for the kid than having two parents with the same ineffective approach.

And, of course, parenting style is not the only factor that affects who children become. Among the many other variables affecting a child’s growth are the following:

It may be beneficial to reflect on your parenting style and where you fall on the spectrum.